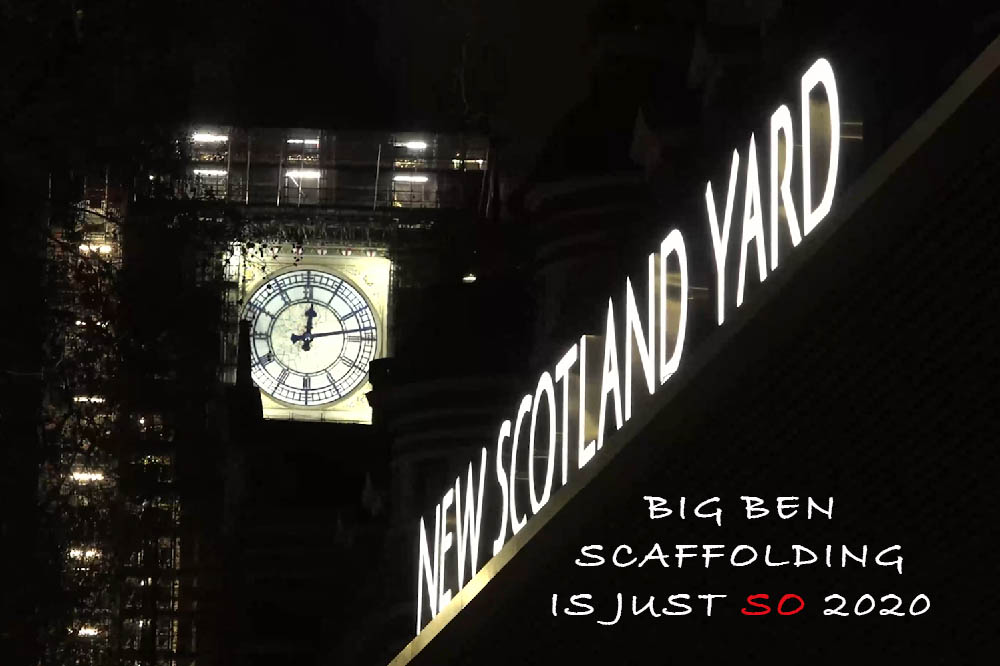 There is a shot in my Christmas Murder trailer video (but also in the opening shots of the actual murder mystery film) where you see the illuminated Scotland Yard sign with Big Ben behind it with a time approaching a quarter past midnight.

I was moderately pleased to capture the shot just a couple of days before Christmas 2020.

But there were a couple of things I didn’t like about it (isn’t that always the case):

The scaffolding was erected around the tower about four years ago and the clock, or rather the Elizabeth Tower, has had its masonry repaired and the clock’s metalwork repainted and regarded. This has been it’s biggest restoration since it was built in 1859.

Midnight is the time Big Ben is most famous for.

In fact, this is the reason it is coming down now. The scaffolding has not been fully removed from the tower. I saw the workmen taking it down a couple of days ago – a few days after Christmas Day. But they are removing enough of it to allow the TV cameras to get a good close-up of the clock face.

There will be no fireworks this year and no crowds to see in the New Year (this is the second year that the Coronavirus has put a stop to that tradition) but at least it will look good on the telly.

And that’s why I am considering popping down tonight to reshoot.

The devil is in the detail

As crazy as it sounds, I think the shot would be vastly improved if it didn’t have the lights around the clock. Also, if the clock is exactly at midnight (especially with the sound of that famous bell), I feel it will add a certain ‘something’.

It is subtle and, of course, it will make not one jot of difference to the actual murder mystery itself but it so often those little details that make something worthwhile.

I don’t really want to drive down to Scotland Yard for midnight, set up a tripod and camera, focus in on that shot again (at the risk of someone official asking me what I’m up to) and wait for the hands to reach twelve. But I feel it has to be done.

As is so often the case in productions. The devil is in the detail. Get these little things right and the rest should just fall into place.

So I am planning that trip tonight and, by the time you purchase and enjoy playing The Nighty before Christmas, the scaffolding will be no more.

Happy New Year to you!

Unless you’re reading this many months after I wrote it in which case…ready for Christmas yet?

Anyhow, I did it. I drove down to Scotland Yard and checked out the exact spot to get both Big Ben and the New Scotland Yard sign in. I set up the camera (I got there at 11.45). Then I noticed that the clock face of Big Ben (the side facing east) was pretty much in shadow. You couldn’t see the hands.

Panic. What to do. At first I thought I may as well just shoot it, despite the shadow. After all, it wasn’t going to get any better. I learned, on New Year’s Eve. that they were lighting ONE of the four faces especially for the occasion. So the face wasn’t actually backlit.

But I waited. I wanted to see the clock face at midnight. I increased the gain on the camera. It didn’t really matter that the Scotland Yard sign was well overexposed. It was always going to be the case, really.

The clock face came into view on my camera screen! I could make out the two hands as I waited for midnight.

Of course, with the gain increased to the extent it was, it was always going too be a grainy picture (and it is). Nevertheless, I’d come this far. So I tolerated a bit of grain. I also had to position the camera slightly differently because there was still an awful lot of scaffolding in place.

So a grainy shot, still with scaffolding. Was it worth it?

After all, it lasts for about 2 seconds in both the trailer and the first video. If it wasn’t for the grain, I’d say yes. No doubt about it. The grain makes it less so. Grain versus scaffolding. I’d prefer less grain and no scaffolding.

I have started to wonder if I should pop down again in May or June. There’s nothing in the picture that says ‘Christmas’ so why not? By then, the scaffolding will have gone, the clock face will be lit and midnight may not be quite so dark.

Oh, and the bongs may have returned. That was the other thing. I filmed for a minute or so either side of midnight but…no bongs.

Turns out the clock was still out of action (they tested it a few times on New Year’s Eve to make sure we’d at least get the midnight sound…and vision on just the one side).