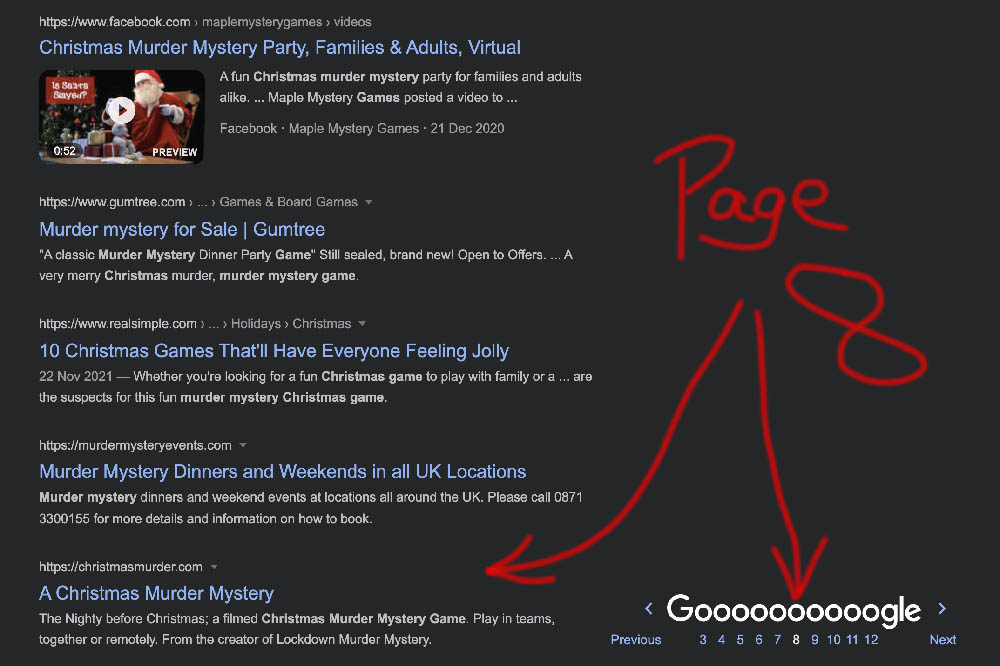 It has taken a while but, at last, Christmas Murder turns up in the Google Search Engine Results!

OK, it is on page 8, but I’m happy enough with that. It wasn’t there at all last week.

Of course, some of that is down to my myriad of fans. No fewer than 11 people bought the game over the festive period. ELEVEN. Imagine that. So that’s £220 back from the thousands I spent on it, but I am not complaining about that. 11 people (especially when they are buying something that according to Google doesn’t exist) is an excellent start.

Because it means that others MIGHT buy it in the future. And you know what that means.

No. What does it mean?

It means that I will carry on (‘Oh no,’ I hear you groan – or I would if I believed for a second that anyone will ever read this. After all, these posts really only exist to encourage Google to notch me up a page or two).

Yes, I will carry on. I have the next one – almost – in production.

It is the Sherlock Holmes Murder Mystery. Yes, the very show that got me through our early days at Accidental Productions. It was our workhorse, our cash cow.

It’s a good show (if I say so myself). At least, its was when we would go out with five actors.

For the recorded show, it will be just me again (sorry, but I can’t afford to pay actors on just 11 purchases). I will play all the parts.

I hope not (we have something in common there).

I have an almost completely finished script for a mystery that takes the viewer / player / detective all over the place. To a load of different websites and to YouTube videos, hidden from view. Secret sites (a bit like ChristmasMurder was until now) around the web.

I really want to shoot this. There would be about 10-15 actors in it in total, so I have to know it will work before I can do it. But the thing I really love about it is that it can be personalised.

A personalised Murder Mystery! How?

I’m not going to give you the answer. Not right now. If I did, someone (assuming ANYONE will read this at all) might nick the idea. And as far as I can see, it is a great selling point. So I want to do it first.

In order to do that I need to generate some income from the two mysteries I have online now. So if you haven’t already played (the vast majority of the ‘roughly’ 7,500,000,011 people on the planet), please do so ASAP.

After all, as the saying goes, ‘A Christmas Murder Mystery is for Life, not just for Christmas’. It will remain online and can be played at any time of the year.

What about those who have played. Did they like it?

Well, I can’t be expected to speak to them all individually, can I. I mean, there were 11 of them.

But yes, I did contact them all individually as it happens.

One had emailed me very early on to say how much she LOVED the mystery game. Then came a big blow! I had a complaint!

Yes, a complaint. Someone said it was a disaster. She hated it.

It later turned out that it was the technology that had let her down. She lives in Georgia, USA and she had bought it for a party of thirteen guests (unlucky for some, herself included).

But she didn’t play it at home. She took it to her uncle’s house and they were set to play it there (without testing the internet connection). They then tried to share it on a number of computers. I’m not sure how. But it didn’t work. The sound didn’t come through and it was a disaster. They spent some time trying to get it to work.

In the end, they resorted to using just the one laptop but, for whatever reason, the sound still wasn’t working properly. Now I know the sound levels are fine. I went through it all. They never peak, they are kept at approximately -6dB throughout, so the problem was on her side.

But I will look into that for future reference and I thanked her for her feedback.

Then I got a really nice, and very positive response from a former player of The Lockdown Murder Mystery. She played the new one over Christmas with her daughter and loved it (she thought it great value). I thanked her for that as her review came in on the same day as the USA fiasco.

Then I emailed the remainder of the players. I heard back from two. Both very positive (again, a reference to it being great value and the fact it was clear it had taken a great deal of effort to produce). A very nice review, much thanks to her for that.

But now I am in the Google Search Engine Listings!

And watch this space. Page ONE by the end of the year.

It has disappeared again!

Yes, I was on page 8 yesterday (and I sort of believed this very post may nudge me on to page 7, but it wasn’t to be). It is now Sunday 9 January, 2022 and I couldn’t resist checking again. This site is nowhere to be found.

I tapped in a search for ‘Christmas Murder Mystery Game’. NOTHING. What is to be done?

Well, my New Year’s Resolution, I think (I didn’t know it was a resolution but I’m now thinking it is) is: NOT to give up.

I watched a programme on David Bowie last night – and there is a short series on Andy Warhol too. Both of these people took years to find fame and fortune. And they were working hard at just that. So if it took them a decade or more to get there, I refuse to give up. My ambition: to get to page 3 at the very least.

Not a huge ambition.

I’m also thinking of driving all the way to The Reichenbach Falls in Switzerland, simply to deliver two or three lines to camera for The Sherlock Holmes Mystery. That may seem a bit OTT but I really think it will be worth it – and good fun to boot.

It was, after all, the very place that Sherlock Holmes died (at least, for the first time).

Trouble is, I’ve now slipped back to page 6. That’s no good. Who ever goes to page SIX when seeking out a Christmas Murder Mystery Game? Especially in January.

However, I am slowly moving things on apace. I am transferring, gradually, over to the new site; Murder Mastery. I’ve virtually copied the front page of this website and built a Christmas Murder Mystery Game Page on the new site. I’ll do the same with the lockdown murder mystery but, for now, I’m going to keep these sites.

I mean, for heaven’s sake, this site is knocking on the very door of PAGE 4 on a Google search. I would not want to lose that. Not with Christmas being a mere 11 months away.

Oh yes. I’ve also changed the hosting platform of the trailer video. It was, and is on this site, hosted on Vimeo but, for Murder Mastery, I’m going to host all of the trailers (and any other ‘freebie’ side videos) on YouTube. After all, Google own YouTube so they like it when you use them.

The downside is that, no matter how busy you say you are, YouTube have that awful views thing. Nothing worse than a video that was posted two years ago having only 24 views.

But it’s got to be done. Murder Mastery will be my Murder Mystery Games platform and, if my plan comes true, I’ll sell scripts, videos, mugs, tee-shirts and…whatever else I get around to.

OK, the regulars are right up there on page 1 (and I notice they are STILL taking out Google paid ads). From this, I learn a number of things. I learn there must be a market for all of this – they must earn enough to pay for those ads – but I also learn that one must keep at it to get there in the end.

I am still looking at what I need to do to get there. But it’s not just about the search engines, it is also about the products. I’ve got to write loads of murder mystery scripts, downloadable games, video scripts (which then need to be filmed) and re-write some of my original murder mystery scripts to sell to amateur dramatic companies, etc. Then I need to get Murder Mastery dot com up and running.

So there is a LOT of work to do before THIS CHRISTMAS. The good news is that it is about nine months away..