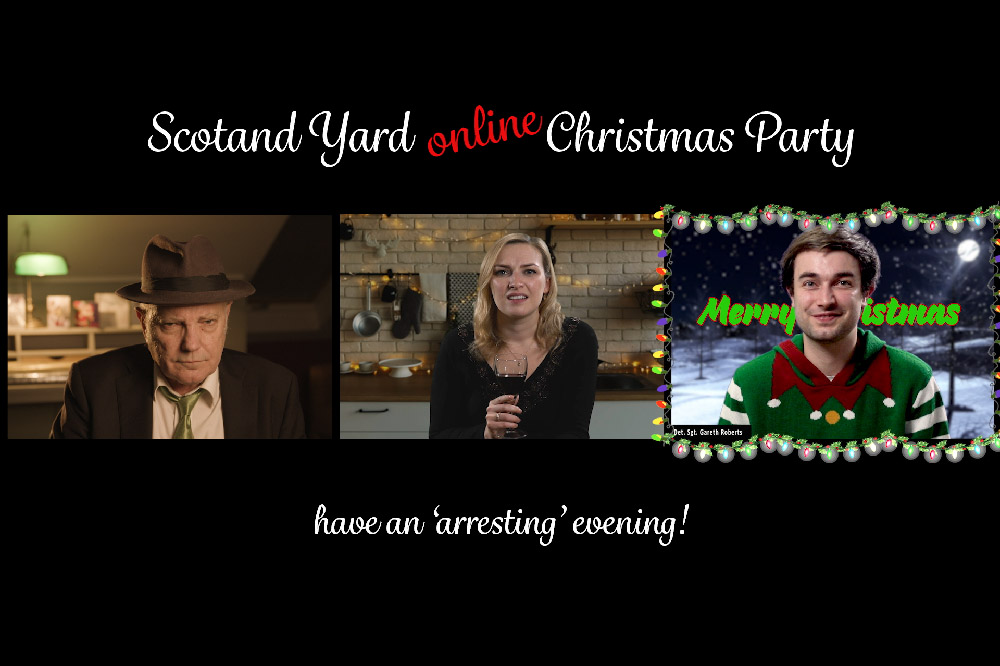 I’m going to be late for Christmas. Again.

I can’t afford to miss it this time. As it stands, I feel my opening scene is likely to be out of date.

With the COVID rules relaxing, things are starting to return to normal. And that is likely to include the Christmas Office Party. Many will start booking live events agin and the online Christmas party will start to look ‘very 2020!’

But last Christmas, when we shot this, we didn’t have time to find and shoot in a hall (not to mention the social limitations of the time) so my opening scene is an ONLINE Scotland Yard Christmas party.

I can just about get away with that this year, but I want this show to remain available for a few years to come. I wonder: will it look out of date OR will it be rather quaint? After all, many rival mystery companies like to set their shows in, for example, prohibition America. And we don’t complain that times have changed (although the way things are going, they may well return).

As far as my inability to finish this goes, it’s easy to make excuses but the truth is I really have been busy since the start of the year. Bit of luck really, earning during the pandemic, but it’s kept me away from Shallow Bottom.

There is a slight chance I’ll be working abroad in a few weeks time. Seven weeks in Kenya. I could, possibly, edit the Christmas Murder Mystery whilst I’m there, but it’s not exactly Christmassy is it, 45℃. I guess, at least, I’ll be close to Mount Kenya, and it’s always curious to look at that snow capped mountain when you’re bang on the equator.

If that doesn’t come off, surely I’ll have the time to get this finished. But right now, in the middle of summer, it looks as if I have a mountain to climb.

I climbed that mountain! And looking back, what a mountain it was. I completed the edits and I built the site. I created and perfected the paperwork. I learned new tricks (discovered MemberPress – a great way to create memberships although maybe overkill for a one-off fee of just twenty quid).

I revisited many of the lessons I learned for the Lockdown Murder Mystery – specifically, the delicate art of SEO (although my toe has barely been dipped into that ocean). But I don’t think I’ve done it in time.

Right now, with Christmas just over two weeks away, I realise how much depends on my friends at Google. Without the tech giants, we are nothing. I cannot see that ChristmasMurder.com is even listed. I am certainly nowhere in the ratings. I have taken out a Google ad and I get a thrill whenever I see it. But the natural ranking is non-existent. There is still SO MUCH to be done.

I sent out an email to everyone who played the first murder mystery. I got two responses; one was to cancel the subscription to buy email and one was to buy and play the game!

Yes! After spending around £2k and hundreds of hours of work, I have sold ONE Christmas Murder Mystery. I don’t even get the full twenty quid, of course. The bank take quite a bit and the government do too, in the form of VAT. But it’s a start.

I saw a quote today from Winston Churchill (he didn’t actually say it today).

Success consists of going from failure to failure without loss of enthusiasm.

So I will battle on. There will be loads more sales! I will get (some) of my money back and I will create even more murder mysteries. That is my plan.

Also in the news at the moment is our current Prime Minister. Mr Boris Johnson (who had yet another daughter today) has been accused of lying. The press have been saying that parties were held in Downing Street last Christmas despite them being illegal under COVID laws (they should have been playing lockdownMurderMystery.com) but the PM denies any such parties took place.

And in an attempt to divert the attention, he has announced new laws this year that will mean people should work from home (although they can go to Christmas parties after work – don’t ask). Perhaps this will mean people in their millions (or even tens of millions) will play ChristmasMurder (if they ever get to know about it).

One last bit of news. We did our first LIVE murder mystery last night in 23 months. Not since January 2020 have I faced an audience IN THE SAME ROOM. Our first and last live murder mystery of 2021.

As of now, I have no symptoms.